skip to main | skip to sidebar

So Conklin came up this week with a story from this past fall...a glimpse into what we can all call a piece of the good life...and without further ado...
This report is tardy but still here. Posting now on 12/30/11 for a trip that happened on 10/10/11 - shameful but here you go.

Man it seemed like an age since I cast the 3 weight. But here I was in mid-October parked in the gravel at the upstream entrance to the fly only in Western PA. I fished this section about 18 months prior just after ice out in early March and had three fish on in the entire outing. I was not sure what to expect but for sure expected little. It hardly mattered however as I watched the early fog yield to blue skies and the chill burn off the morning air. Not another car in sight at the lot which made me wonder if others knew something I was soon to discover. Maybe this creek is not worth the trouble, or maybe the fish had already been taken despite the C&R requirement on the posted sign. Well, I was here, wasn’t going home til late that night after class, and figured a few hours in the woods as they bloom with their vibrant fall colors would do a fella good. The gold and red leaves against the azure backdrop were just spectacular. This week and next are considered the peak weeks for the changing leaves and they are not to be missed as they paint the hillsides of the Western Alleghenies. As I finished my coffee I wandered down to the bridge that delineates the fly only, C&R area from the upstream section that allows everything except hand made explosive devices. The water was low and crystal which did not add to my hopes for the outing. Still, here I was in the midst of topographical heaven so might as well pull on the hip boots and string up the rod.

It was a short walk thru a well traveled trail to the first pool. As I made my way through the brush I heard strange sounds. They were so strangely familiar and yet so foreign to what I expected that I had difficulty reconciling what I thought would be the case with the true nature of nature. These sounds were reminiscent of those made by fish as the chase each other around in their spawning charades. As I penetrated the brush and was able to gain full view of the creek I was amazed to see pods of trout surfing about in pursuit of each other. But, this was October, not April when spawning usually takes place. I stood amazed at the spectacle. Maybe they were just frantic from the low and clear water. Maybe they were so skittish that they had little idea of what to do or where to go. Well, one question was answered. There were fish in this creek and an incredible number compared to what I expected. Given what I saw and the water conditions I tied on a pheasant tail under the assumption that the most natural bug would work the best. Cast away for about 20 minutes and sure enough fish on. What a little jewel this 13 inch rainbow was. That single fish would have been sufficient to complete a perfect day. I admired the colors of this little stocker and then released him back into his watery home. I thought that nymph was the answer to my hopes so I continued to cast for another 30 minutes with no encore. Well, maybe it was a lucky break or maybe that was the dumbest fish in the creek as no more came upon a liking to the sz. 12 PT. I switched to a zug bug and that proved useless. Well, there is always sucker spawn. Let’s go with white which seems to work well in clear conditions. The first cast found multiple fish fighting over the fly. It was a riot to see them competing for the bug and numerous fish quickly came to hand. It was a simple matter of watching the bright white bug disappear into the gaping jaws of any fish that came near it. After 9 fish I must have schooled them in the way of the spawn and they shut off. About the same time the sun was clearing the tree tops and penetrating down into the little creek valley, lying heavily on the water’s surface. It seemed the whole party started to withdraw to more defensive behavior.

Maybe it’s time to move downstream and see what other parts of the creek had to offer. Below the run was a bend in the water that held wood and some deep holes. As above, there were numerous trout zooming around in seek of shelter or food. We hadn’t met before so it was only right that I offer my gifts. I clipped off the SS and tied on an Oregon Cheese blood dot. Again, I simply watched the egg drift downstream to its imminent demise as yet another trout was fooled. This section of the creek had much more cover from above so the bright sun that was warming the upper stretch was unable to make contact here and the trout were braver for it. I spent a couple hours here, admired 8 or 9 fish on the end of the 6x tippet and decided to move back upstream. I few others fell to the egg and I couldn’t help but wonder if we had met earlier that morning. By now I had spent 4-5 hours on this project and felt sated in my experience. Still, there was the upper reach of the creek that was open to any means of fishing and allowed a 5 trout limit. Given that it was unexplored and unoccupied I thought a brief excursion might prove fruitful. I quickly made my way up to some trouty water that looked promising, flung the egg about and came up empty handed. Moving up still further the water quality and cover actually improved. As I stood there casting, a man approached me from behind. I was surprised to see him but was grateful as he warned that he had heard some huffing in the woods and thought there was a mother bear with cubs not for away. That was all I needed to know and vowed to myself to be carrying next time I entered this territory. His message was also all I needed to hear to decide to wrap up this little junket and head back to the car. Once there I reflected on the magnificent morning I had and decided right there and then that a beer was in order. Popped the top on a Miller and just sat there for a while looking and listening to the woods and trees wondering if I might not just hear or see in the distance a large black shape making her way in for some of the lunch I had left in the creek.

Thank you to Conklin for sharing!
Posted by The Mad Trouter at 8:38 PM 1 comment:

So shortly after my last post, we had some technical difficulties that took us out of the blogging game for a bit...

With a new Mac, we're looking at a brand new 2012 full of blogging and pictures like non other. Beginning in January, we will be coming in with a brand new line up of fish tales... 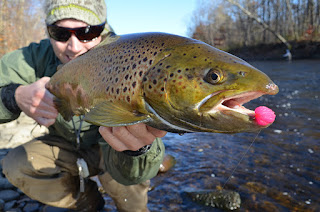 Well…it’s been an amazing weekend. Not much fishing in recent weeks, but Friday – Tuesday was a great stretch of just fishing…Amy and I headed North in search of serenity, giant brook trout, salmon, (and for Amy, Moose). We found all of the above, and had a blast doing it. Below is the photographic evidence of our time…

It's been a hectic few weeks here...From saltwater, to freshwater, to camping and travel...I've been super busy. There have been no real highlights since we last wrote, but a few stripes and brookies to hand. Nothing out of the ordinary, but it's helped fill my weeks up. This week is actually the first week in a long time that I've not fished every week day (or traveled). I’ve got a few days off, but then we’re heading North for the long weekend to pick on some brook trout and salmon.

Boz has some great prospective spots up North, so we’re stoked to get up and pick up a few fish. Both ponds and rivers are game on, so we should have some updates next week…

Alright, so we’ve been off the blog quite a bit…but with good reason…

Seriously though, the striper fishing has been off the hook. I’m just finishing up my 6th straight day of chasing some line sides and I have to say that I’m addicted to the bone on these fish. I’ve certainly not given up on freshwater fish, but at the moment, I’ve found myself obsessed with big knarly bass in the surf…

So with tonight being an early night (I did fish earlier), we decided to update you all. No freshwater fishing these last few weeks, but we do have some in store over the next few weekends. Some out of state stuff should bring us more pictures and stories. Foul weather had kept the camera in the bag the last few trips, but there will definitely be some striper pics in the near future…

If you’ve got stories, pictures, or would like to contribute your fishing ventures, please feel free…we’d love to share the wealth!

Tight lines, and we’ll be back shortly!

Posted by The Mad Trouter at 10:40 PM No comments:

Update & Fish Of A Lifetime...

Slow week, high water, though Jeremy Cameron of Flies & Fins was able to coax one of the most massive and beautiful brook trout I have ever seen to eat. Weather is starting to turn, so we should be seeing rivers lower down, and stripes in the salt... 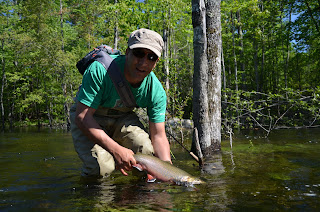 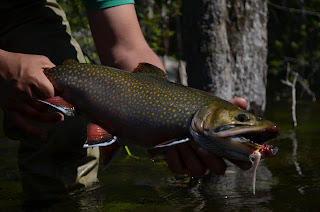 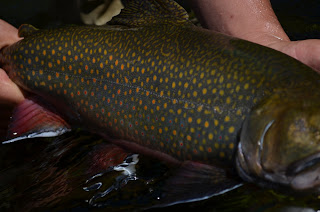 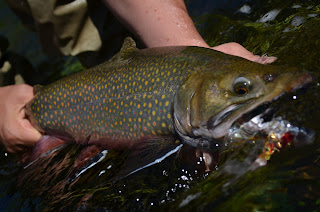 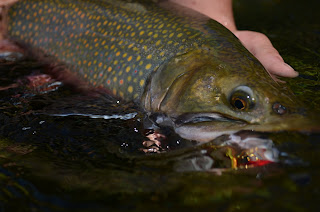 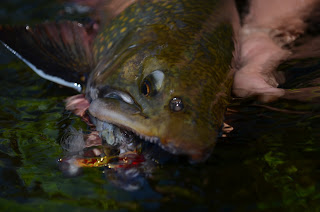 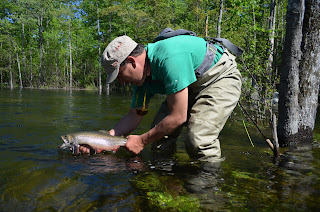 Schmidt hasn't been doing back back in the big "O". Pictures of his hog from this past week... 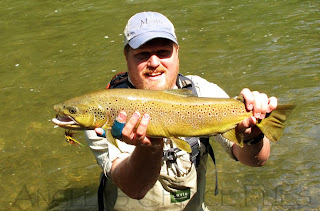 Update...Not Sure Where To Begin...

Ok...Last few weeks have been a bit hectic between work and some fishing over this past weekend...here we go...
﻿﻿
﻿﻿

Friends Of The Mad Trouter